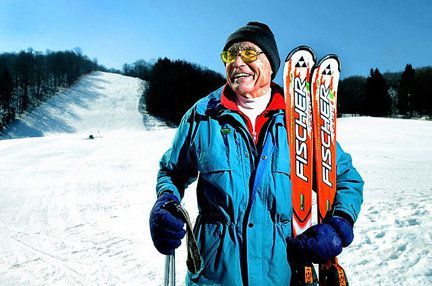 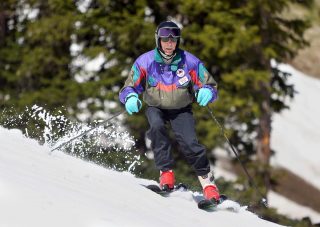 Can we all be as lucky as George Jedenoff pictured above who celebrated hitting 100 by skiing from the top of Hidden Peak to Tram Tower 4 in Utah ? You can read more about George’s story here

Those close to George attributes his amazing feat to his regimented training and positive outlook but we can probably sprinkle in a bit of genetic lottery good luck as well.

So does age affect us more mortals and is there much we can do it about ?

Well the bad news is that certainly most of systems start to slow from our peak in our mid 20’s and certainly by our 40’s we start to see significant changes in quite a few of our systems.

The good news is that there is still a lot of debate about how much deconditioning is responsible as opposed to the ageing process and the right training at any age can often result in marked improvements.

As a thought experiment imagine cloning yourself. If you somehow manage to stop the ageing process and do whatever you normally do and your clone trains really hard but still ages. Who would be the better skier in Niseko next year ? What about 5 years ? or 10 years time ? Interesting questions. 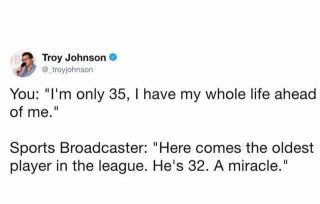 So how does age ( de-conditioning ? ) affect our snowsports ?

There are primarily 3 systems that are going to be particularly relevant for your time in Niseko although of course many more such as the Urinary etc are all going to have there little claws out.

Our brains and special senses are not too adversely affected ( hearing does take a bit of a thump ) until we hit our late 60’s so let’s concentrate on the musculoskeletal system were we are essentially talking muscles, ligaments and bones.

The loss of muscle mass as we age is known as Sarcopenia and you can expect to loss about 10% per decade after your 20’s. As you can see from the very ball park graph below things looks pretty dandy just before age 50 where you still have around 85% of your peak muscle mass, more than enough to enjoy a fast past run done Mount Annupuri at near your peak performance. 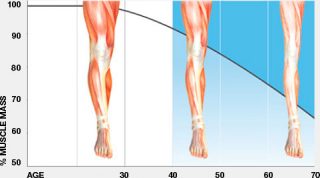 However this is a bit of an oversimplification. Not all muscles are the same and you essentially have a bit of split in your muscle types.

Type2: Fast twitch. This are designed for explosive energy.

For some reason ageing seems to affect the type 2 fast twitch fibres more than our slow twitch. What we notice is a more of a decline in muscle power rather than muscle strength. What’s the difference ?

If you remember your high school physics

Muscle power = force and the velocity of the muscle contraction

Whereas muscle strength just refers to how how hard you can push. Think of it as you can still push a leg press up fairly well but your power such as the ability to do an explosive squat really takes more of beating.

So urrrmm…… the good news ?

The good news is that training can make a huge difference to your loss of muscle mass.

If you didn’t train much in your younger years it’s quite possible to be stronger than you have ever been well into your 50’s. If you did train a lot and have athlete background sorry your a bit more screwed and will have to be happy with not losing as much as you could have and maintaining a higher level of fitness that most of us well ever reach anyway.

I think the take home message is try and do some resistance training 2-3 times a week and don’t forget to incorporate some explosive elements such as jumping jacks or boxing to really help the loss of our type 2 muscle fibres. It’s no good doing heavy weights if you don’t have explosive power to drive a turn. Get some muscle velocity into your training as well.

One of the questions we must ask ourselves is do we have an increased risk of fracture doing snowsports into our later years ?

So here is the good news. Older skiers show up very flatteringly in ski injuries statistics. Even controlling for age older skiers don’t seem to injury themselves all that often. That prize goes to ( you guest it ) Males in the 20’s who just love to board slightly passed their ability.

If older skiers broke bones more easily they would be far better represented in the  literature. What this tells us is that older skiers are probably better at skiing in line with their ability levels and the old bones hold up better than we think they do. 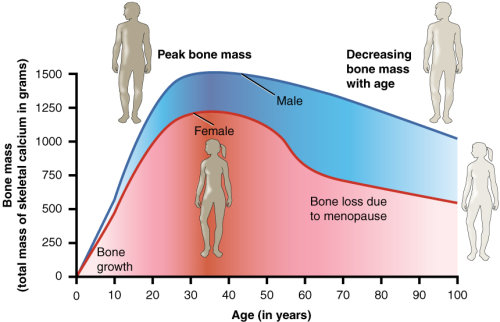 Bone Mass peaks quite late in our 30’s and holds pretty steady for both males and females until the early 50’s. Then something interesting happens to females. As they go through menopause in their early 50’s there is a marked drop in density loss from their 50’s to 60’s. The loss slows to match males by about the mid 60’s but by this point there has been a marked loss. 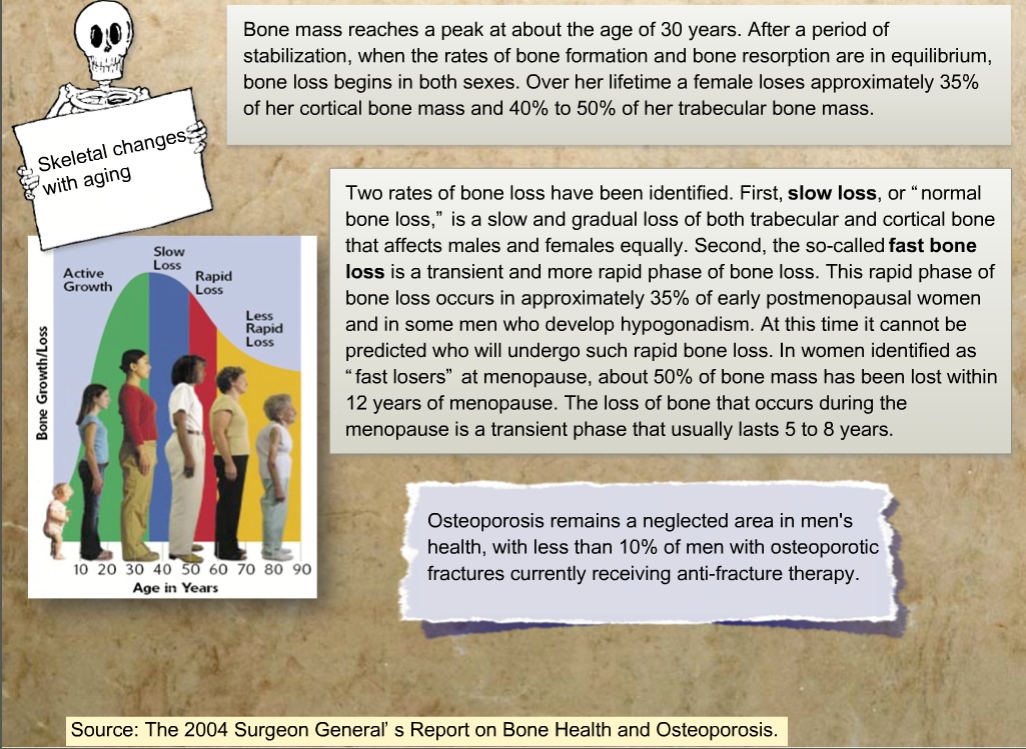 Some females experience a very large bone density loss. About 35% of females will develop a marked acceleration and may loss about 50% of bones mass. At this point the chance of an oopsie on the slopes becomes a bit more a possibility.

Because we currently don’t have a way to predict which females are going to lose bone mass Niseko Chiropractic advices all females about to go through or going through menopause to see their GP and get their bone density checked out. This becomes even more important if you have a family history of problems.

I would also suggest anybody from either sex over 65 looking to carve it up in Niseko would be well advised to talk to their doctor about this issue. But again the literature does not support the idea that older skiers have more injuries so factor this in when you are making up your mind.

Ligaments are the neglected middle step child of the MSK tree. They also present unique challenges for Niseko physio’s and chiropractors to address.

Ligaments connect bone to bone and important in maintaining the integrity of our joints. They respond less than our muscles in weight training meaning it’s harder to combat the effects of ageing on our ligament systems. They also have a poor blood supply leading to longer than expected ( or liked ) recovery times. I would always rather treat a muscle injury rather than a ligament injury.

The second problem with ligaments is when they are damaged they often heal stretched. So even though the ligament may repair most or even all of its strength the ligament is now song long that it is no longer able to give the support that used it. This is particularly relevant to ankles and knees and shoulders. 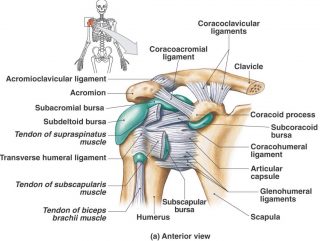 You can do a lot to ensure healthy ageing of your ligaments by not injuring them in the first place !

If you do there the good news is your muscular system can be trained to take some of the stabilizing role of the injured ligaments and surgery is getting very precise at repairing them but the unfortunately it is likely that our ligaments will lose some strength as well age. 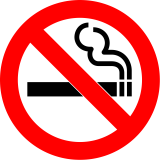 Not smoking is another hot tip to make the most out of ligaments.

Because the blood supply of ligaments is poor and smoking affects our microcirculation a smoker tends to have more problems in their avascular tissue such as spinal discs and knee ligaments.

So there you have it.

A very brief summary and each person is going to have their own set of injuries to battle with so this is very general in nature but Niseko chiropractic hopes the take home message is ” Use it your lose it ” and the literature indicates that snowsports as you grow older may be safer on average than you think.